Many times when you cross over an international border the landscape doesn’t immediately change. Southern Laos changes gradually into northern Cambodia for example. I expected the same experience after crossing from Ecuador into Peru. The border crossing was low-stress and highly informal. Peru gives you a small piece of paper to present when you leave the country which I am terrified to lose and Ecuador lets you freestyle how many days you have been in the country as long as it’s under the visa limit of 90.

As we continued down and out of the Andes it became immediately clear that northern Peru was a different climatic zone then we were used to. First of all it’s hot. Muggy inland Peru was a wake-up call that we remain close to the equator and that it’s still summer in the Southern Hemisphere.

It became quickly apparent that Peru is a poorer country than Ecuador. Garbage is piled high on the side of the street, moto-taxis flourish and infrastructure is in disrepair; roads flooded up and over the sidewalks our first night in Piura. Despite this, the country is slightly more expensive than Ecuador. Some of the towns we traveled to didn’t have much in the way of a budget hostels, forcing us to stay in AC-less “business hotels” for $65 US in ugly parts of town. Piura was a “one and done” kinda town.

After fleeing Piura, we traveled south to Chiclayo. Chiclayo isn’t much more than a typical, hot and humid midsize Peruvian city. We stayed with a lovely British/Peruvian family for two nights who helped us feel at ease in this overwhelming town. We decided to stay in Chiclayo for a few nights to learn more about the rich archaeological sites which surround it. The most famous of which is the Lord of Sipan, a fully intact tomb discovered by archaeologists in 1987. Sipan was home of the Moche culture, which ruled northern Peru from 100-700 AD. During the height of their power the Moche ruled regionally: Trujillo to the south, Sipan to the north and an additional region run by a succession of female priestesses. I knew literally nothing about the Moche – including their existence – before traveling to Chiclayo. They were a culture of meticulous pottery, staggering architecture and passionate beliefs. We decided to go to the excavation site of the Lord of Sipan before viewing the museum the following day. The Lord of Sipan was the first tomb discovered and thirteen others have been found since. Most recent was the Warrior Priest found in 2009. The Huaca Rajada site is where the tombs were found and has a small museum onsite. It was interesting to learn about how the same holy sites were used over and over for important burials. Like many cultures, Moche people of importance were buried with everything they might need for the afterlife. You know, things like three of your favorite nose rings, hundreds of ceramic vessels, a beheaded llama and a concubine or two. Don’t worry the priestess didn’t get lonely with seven hunks murdered to keep her company forever.

The following day we took a combi* to Lambayeque to see the main event, the Lord of Sipan who was buried with the most swag of all. The museum didn’t allow any photos inside which is a shame as it the best museum I had been to so far in South America. The Lord of Sipan is one of very few tombs in Peru which had never been looted. Many of his belongings represented duality and he was buried with both a gold and silver version of massive crescent sacrificial knives, beaded necklaces, masks, sacrificial blood goblets and countless works of pottery. All held in a state of the art museum. My only complaint? Not enough English signage.

Our next stop in Northern Peru was only three hours down the coast, in the beach town of Huanchaco. Huanchaco is located just 12km west of much larger Trujillo. It’s known for surfing and has an effortless, laid back vibe. Eric and I stayed here for four nights enjoying the surf and sand. The beach is a little dirty but the waves constant and the weather warm. One day we rented boogie boards and spent some time embarrassing ourselves in front of Peruivan teenagers. The beach has a rocky bottom and the surf was relentless so we were exhausted and beat up at the end of the day. Another way we passed the time in Huanchaco was eating cremoladas. Cremoladas are sort of like blended Italian ices made with fresh fruit, ice and sugar. The ones sold by Hospedaje Oceano are made with 100% frozen fresh fruit and are downright addicting. We had to try new flavors everyday! I loved the rare fruit from the Amazon like the tart camu-camu or the creamy custard apple. Cold drink in hand, the real reason to spend time in Huanchaco is to explore the ancient ruins around the area.

The first ruin we explore was the UNESCO World Heritage Site of Chan Chan. Built in 1300 AD this massive adobe city is the largest in the world. Approximately 60,000 people lived here at it’s height. The ruins fill the distance between Huanchaco and Trujillo. They are currently crumbling hills of beige but with a little imagination you can see the glory it once had. The royal compounds of the city have been restored, the original walls encapsulated in new adobe for protection. We wanted to avoid the $20 USD charge for a tour guide so I learned about the site on Wikipedia after the fact. The most impressive parts of the site is the size and the honeycomb patterns on walls. Chan Chan was the capital of the Chimu empire and it was here that they stored grains and water as well as buried their dead.

We ended up having an extra day in Huanchaco and decided to check out the Huacas del Sol y la Luna on a whim. I am so glad we did as it ended up being one of the highlights of our trip so far. These two structures are 700 years older than the city of Chan Chan. They share the same name as the massive pyramids outside of Mexico City but this name was given to them in modern times. Archaeologists don’t know what they were originally called and the Moche people worshiped neither the sun or the moon. Instead they worshiped a fanged and tentacled creator God. This deity can be seen today adorning the walls of the smaller of the two buildings. The smaller one was used for religious ceremonies while the larger was for political administration. The entire site is watched over by the University of Trujillo and is much better run than the national site at Chan Chan. A English language guided tour was included in our ticket. The larger of the two buildings has been mostly destroyed by erosion when the Spanish rerouted a river; however, the smaller building has been preserved thanks to a Moche ceremony which would happened every 100 years when they would brick up the walls to encapsulated the earlier temple. This was repeated for 500 years before they moved the temple to a new site. The fifth temple had been looted and destroyed but the fourth temple remained intact underneath until discovered in 2009.

These temples were sites of ritualistic battles where warriors would take hallucinogens and battle. The losers would be sacrificed on the white rock of the mountain, part of which was built into the temple. The blood of these sacrifices would be shown to the people in massive courtyards decorated with colorful painted friezes. How do we know about this? Because the friezes remain today, protected for thousands of years by the temple encapsulation process. Incredible images of Gods, animals and people decorated the walls of the temple. The most awe inspiring part is the outside courtyard, where your common people would look up at the priests and their cups of blood. The walls are covered with bright murals floor to ceiling. The design has five levels symbolizing that this is the fifth temple. There is even the remains of a massive snake decorating a ramp. You can see a little of the fourth and third temples in a hole created by grave robbers but for the most part the lower temples can not be excavated without destroying the ones on top. What wonders where buried under our feet? What is left to discover? The guide said that the archaeologists were at the whims of available funding (aren’t we all) and excavation came to a stop for years a while back. I will follow this place with interest as it is one of the exciting unsolved mysteries of the ancient world. 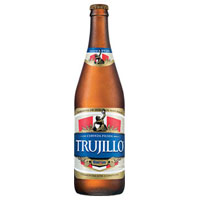 What to drink in the heat of northern Peru? Try a Trujillo Lager!

This bland lager manages to taste off even at very cold temperatures. It’s the lowest price point for macros and its company helps fund local conservation work but I’ll stick to Crystal.

Score: one out of five sweating bottles.

*Combis are communal airport vans. You stand on the side of the road until a man or woman with their head out the window drives by screaming a location to you. They might even jump out, grab your arm and try to drag you on. Doesn’t matter if you were just trying to cross the street. If you do want to head where they are going you pay  1.5 soles (about 50 cents) to join anywhere from nine to fifteen of your newest friends, sitting on top of each other in the heat with blasting music. The driver will take a route of indeterminate destination and when you want to get off, be sure kept your knees bent as there is very little chance that the driver will make a complete stop.