Smoke it if you can find it – Bamberg Germany

Our trip to Southern Germany had to be planned around family and festivals; hard life, I know. We found ourselves with four nights to spend before meeting family in Munich for Octoberfest. Using Nuremburg as our base, we departed on a mini-trip around Franconia.

German Franconia is a region of Eastern Germany that boarders the Czech Republic. The region is famous for containing many of the towns on the “Romantic Road” like Regensburg and Rothenburg ob der Tauber. We were drawn to the region because of its famous medieval sites and that it’s said that Upper Franconia has the highest concentration of breweries in the world. Americans might tag their photos #drinklocal but Germans have been drinking hyper-locally produced beers for over a thousand years. Each village, town and burg has their own brewery which has been keeping their local tradition alive by brewing a beer great-grandpa Emil would have recognized. While the majority of beers in this region stick to the same traditional styles—Helles, Weizens and Bocks—one town’s breweries stand apart.

With a small population of only 75,000 people, Bamburg would be just another stop on the UNESCO tour of Franconian historic towns if it wasn’t for a distinct style of beers which draws in tourists from around the world. Bamburg is the home of the “Rauchbier” or, “smoked beer.” The malts are dried over an open flame campfire. This gives the beer a distinctive bacon-y flavor which is certainly one of the most unusual beer styles in the nation of Beer Purity Laws.

Rauchbier wasn’t a new style for me. In fact, Live Oak Brewing in Austin does a wonderful job with their Grodziskie, which is an aggressively hopped, low ABV, smoked plisner. Because I like a hop-forward beer like the Grodziskie, the traditional smoked märzen isn’t my favorite style. I find the smokiness to remind me of liquid smoke if it’s done poorly, but a beer history geek like myself couldn’t pass up the idea of having a mug-full from a brewery famous for its smoked beers as far back as 1405. In the center of quaint Bamburg Old Town stands Schlenterla which claims to be the originator of smoked beers. We visited Bamburg on a Saturday so the town was packed with shoppers and day trippers from around Germany. Before making our way to the Schlenterla way wove our way though a farmers market complete with elderly brass musicians. We even took the time to visit a Brewers Museum, which happened to be more like an antique shop than a museum with old glassware and rusted metal signs. The owner seemed slightly bored and annoyed by us*, which left us to explore the museum alone. I was particularly amused by the risqué painted stein lids so one could stare longingly at a painted butt while downing a massive, bland beer.

By the time we had finished our visit to the museum we were more than ready to try out this famous smoked beer. We were in good company. Drinkers spilled out of the brewery on to the sidewalk clutching 16 ounces of dark, smoky goodness. Despite this, when we looked around the restaurant, all of the tables and benches were deserted. Once again the lunchtime travel curse had struck**. Despite the lack of food service, people continued to mill about with full beers. Where were they getting them? After a few false starts we found a small window that connected the interior hallway of the restaurant to the kitchen. Here you pay around ten euros a beer (cash only), five for the beer and another five for the glass deposit.  We waited in line, bothered our bartender with our fancy order—only one type of beer is usually served during off-peak hours—took our beers and tokens and returned to the street to drink with the locals. The one available beer was the specialty of the house: the aecht schlenkerla rauchbier märzen. Standing outside a building over 600 years old in my German camouflage of a down jacket and jeans, it was easy to embrace the sense of place which makes Bamburg so special. Craft beer is so much more than a tasty glass. It’s the chance to share in something local and fresh that sets a place apart. So for that reason I give a loving Pröst to Bamberg’s smokey märzens.

*Not that he was rude per say, more that he was the standard amount of friendly for the region.

**I have a terrible habit of getting hangry during my travels. I wake up, eat a large breakfast and then try to get in as much sightseeing as possible before hunger sets in. This usually takes me until three or four in the afternoon. At this point both Eric and I are so hungry we could rip reach others appendixes (appendi? appendices?) out, for not only are we hungry but all the restaurants are closed. In the States we are used to 24 hour diners and restaurants ready and willing to sit you at anytime during the day. In most countries restaurants take a break between lunch and dinner service. This means that Eric and I regularly get hangry during our travels or we eat a lot more quick snacks then sit down meals. 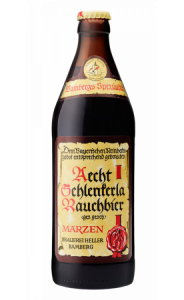 Imagine dissolving blended bacon into your favorite lager. It shouldn’t work, but it does! This might not be a beer you want to chug in the heat or pair with any lightly flavored food, but it has an appeal all its own. To quote the brewery itself-  “Even if the brew tastes somewhat strange at the first swallow, do not stop, because soon you will realize that your thirst will not decrease and your pleasure will visibly increase.“

Final Score: Three out of five times it took us to return our glasses.