Lake Titicaca – The Birth Place of the Sun

Lake Titicaca is the largest navigable lake in the world. It’s a massive lake which seems to press up against the sky due to its elevation. Lake Titicaca spreads across the border of Peru and Bolivia. We used the Bolivian city of Copacabana for our base of exploration around the lake. Getting into Bolivia was an adventure in itself. If it weren’t for the Chileans taking their ocean*, Americans would be number one in Bolivia’s burn book. The current President Evo Morales is currently in his 11th year of Presidency. He has had a rocky relationship with the States to say the least; the US accused Evo of working with cocaine producers, then Bolivia kicked out the DEA so the US pulled out the Peace Corps. In addition to all this back and forth, Bolivia requires that incoming travelers complete the same steps for a visa that the other country asks of Bolivia. Turns out that the US makes the visa process for Bolivians a massive pain in the ass.

This mandatory visa for Americans is the reason Eric and I found ourselves in a different line than everyone else waiting to visit Copacabana with photocopies of our passport, passport photos, printed hotel reservations**, proof of yellow fever vaccination and $160. I have never paid even close to that for a visa before, which may account for why Eric and I are the only Americans in a land of British, German, French and Israeli tourists. We got off the bus, waited in our separate line with all of our paper work ready to go. First the man at the desk had to look over our US $20 bills to make sure they were perfectly crisp, free of all tears. Eric and I both took out $200 from the ATM in Puno as we knew that customs would be strict. I was sweating bullets as bill after bill failed this man’s “test”. Eric and I had no extra “good” 20’s after paying him. If one Hamilton would have looked at this man the wrong way, we would have been sent back to Peru. After that he had to process our paperwork; however, he told us he was “locked out” of his computer and would have to wait for the man who remembered the password. He took out a lollipop, told us it would take about “10 minutes” and started scrolling through Facebook. Ten minutes went by and he told us to wait another ten, meanwhile all the rest of the passengers on our bus are rapidly receiving their free Visas and going back to the bus. After waiting 30 minutes our bus driver told us he would wait only five more minutes for us before leaving. We asked the man at the desk again about our visas and he looked at his watch, tossed away his lollipop stick and logged on to his computer with no problem. Eric took about five minutes to get his visa processed and then ran to the bus to keep it from leaving without me. The only reason the bus waited the five minutes for me to get my paperwork processed was that Eric stood outside the bus with his hands in the window lying that he could see me, while the bus slowly inched away. After my visa was complete, I had to sprint to catch up to the bus as it was pulling off down the road. Whew!

Copacabana is a small but scenic town on the shore of Lake Titicaca. It has one miserable street of tourist restaurants and the smallest market I have seen in any Bolivian city. Copacabana has a striking cathedral which is home to the Virgen de la Candelaria, a statue carved by an Incan man after seeing a vision of the Virgin Mary. She is now the patron saint of Bolivia and her likeness is seen all over the country. Another fabulous tradition in Copacabana is the blessing of the automobiles. People will by auto decor and champagne from the stands outside of the church and then pay the priests to pray over there cars while blessing them with holy water. Let’s just say that I have been on many a Bolivian road and any step you can do to protect your car is a good investment.

As you might imagine we deserved to treat ourselves in Copacabana after our time at the border. We stayed for one night in this incredible boutique hotel where each room is unique. Some of the rooms were shaped like castles or seashells but ours just had a breathtaking view, space to sleep five, indoor and outdoor hammocks, pet-able llamas, kitchenette and shower/garden. All this for $50! We had a wonderful night drinking tri-mate tea*** and watching a lightening storm over the lake.

The next morning we took a boat to Isla Del Sol where we were excited to hike from the top of the Island Cha’llapampa to the bottom to the island and stay the night in Yumani before heading back to Copacabana. What we didn’t count on was an inter-island feud which resulted in the closing of the northern two thirds of the island. The boat would only drop us off at the bottom of the island and after about an hour hike we encountered a check point and a bunch of locals telling us that the north was closed. After doing a little detective work with Eric’s Spanish we discover that the villages in the middle of the island (Cha’lla)

had been in the receiving end of tourist money for a long time. Then the government came in and built basic lodgings in the village at the top of the island (Cha’llapampa). Well the people in the middle didn’t like the sound of that so they came over in the dead of night and burnt down the new lodging. In retribution the government has shut down all the island except the southern bit from receiving any tourists. No one will be able to see the other parts of the island until the middle village rebuilds the upper villages hostels. It’s very childish and extremely frustrating as the northern part of the island has more attractions and the hike from tip to tip could have been a trip highlight. Instead we had a nice night watching the sunset and eating trucha (trout). Passover started during our time in Lake Titicaca so we only had time to sample one beer, the bizarrely named Judas – for experts.

** Six pages for five US dollars. 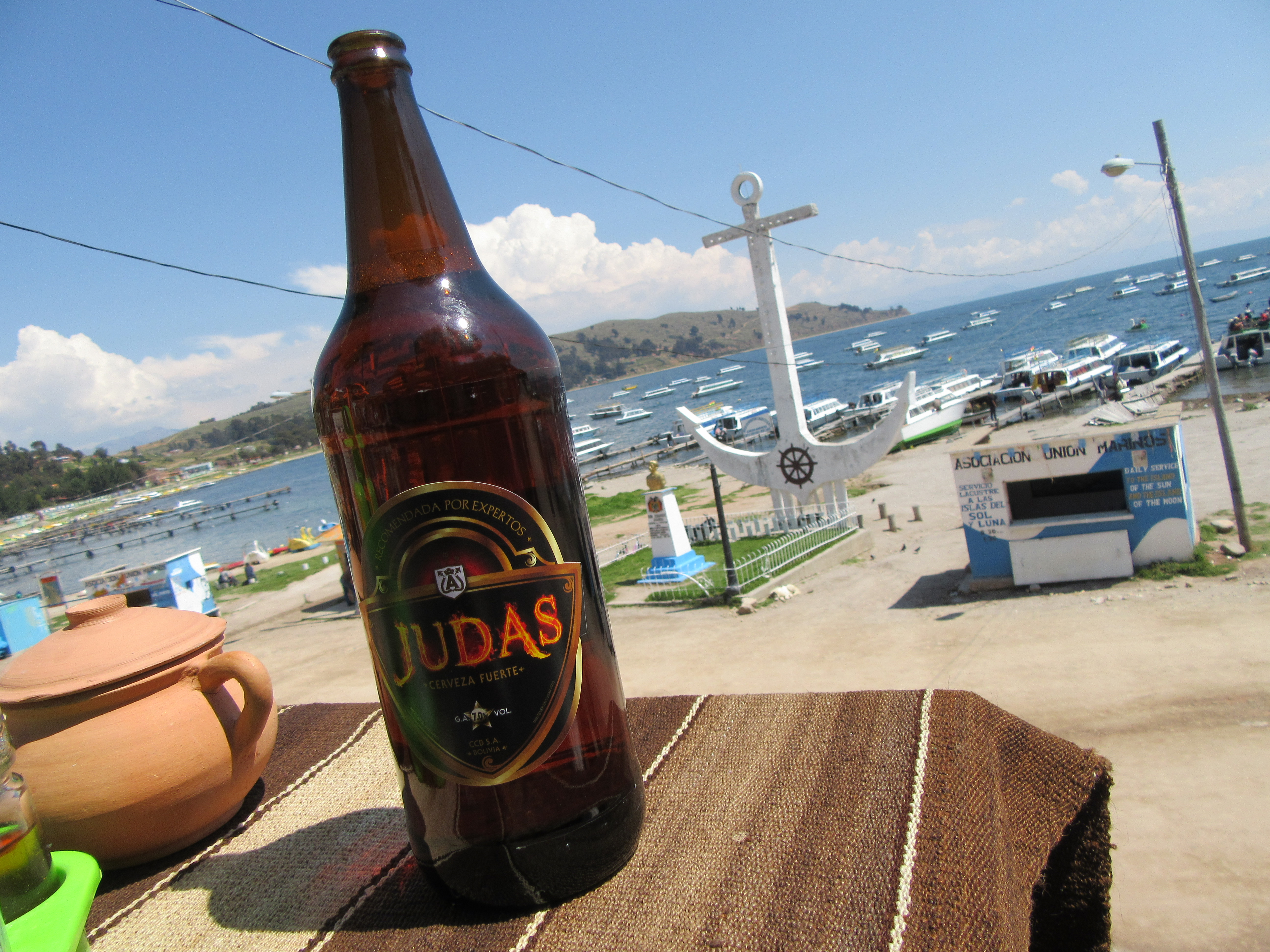 This is the highest ABV beer I have seen sold in Bolivia. This might explain why the bottle warns you that it is “for experts”. Forgive me for not taking this warning seriously. I know for a fact that Bolivians prefer 99% grain alcohol over 7% beer. The beer itself is a sweet but drinkable malt liquor. Not great, but fine for Bolivia. I’ll be kind and round this one up.

Final score; Three out of five sunsets on the lake.