As a young girl my Dad would often mention the book/documentary/legend “Touching the Void.” If you have never heard of it, go to YouTube right now and watch it right now.

Finished? Crazy, right?! I would have died before reaching the summit. Also does Joe seem like a bit of a dick to anyone else? Anyway.

Touching the Void takes place in the Cordillera Blanca, the stunning mountain range surrounding Huaraz in central Peru. I wanted to do the famous Santa Cruz trek through these mountains as I certainly wasn’t prepared to summit any of them. Huaraz, like every other place we’ve been this whole trip, was currently in low season. That meant that try as we may, we couldn’t find anyone to join our trek that week.* Instead, we ended up taking a private trek with Caleb Adventures. This meant spending the next four days with just us, our guide, our muleteer, three donkeys and a driver. It was a little over our budget at $60 a day but the recent days had been under budget and I wanted to glamp.

The Santa Cruz Trek is four days and three nights over the most stunning landscapes on earth. The route sees hundreds of hikers a day in the high season but as we were attempting this in the wet and rainy season, we were alone the majority of the time. The first day we woke up at 5:30AM for the three and a half hour combi ride up and over the mountains. The scenery was masked by thick cloud cover most of the time but it was majestic whenever we got a brief glance. We hiked for six hours the first day, the majority of it being in the howling wind and rain. Was this the reason we were the only ones on the mountain? At the end of the day Abel cooked up some fresh mountain trout and even treated us to a beer! Despite the exhaustion and food coma, I had a hard time sleeping. There was no toilet tent and as the only woman on the mountain, I had to walk through a bog filled with massive, but friendly, cows to find a bathroom. As we were recommended to drink 2.5 liters of water a day in addition to endless tea and coffee, nighttime squatting with bovines became my new pastime.

The second day proved not only to be the wettest, but also the most difficult day of our trek. We started in the Paria Valley which is 13,024 feet about sea level. We started the slow and steady assent up and over the pass at Punta Union. This was the highest elevation we would see during the four day trek. Climbing 2,412 feet up from our first campsite the pass was at 15,436 feet about sea level. The day had started out clear with some breathtaking views but like magic, the moment we crossed over the pass the sky turned gray and it begin to snow.

Our guide had a lunch of pasta soup and potatoes prepared for us; Eric and I munched on carbs beneath a tarp as big fat flakes began to fall. We ate quickly and rushed down hill not wanting to be caught in worse weather. We made it down the other side of the mountain in three hours in the icy rain. The worst part? Thanks to the clouds we never got to see the view from the top of the pass.

It rained all evening and overnight. I woke up moist but not wet thanks to the extra thick camping pads. When we went to bed there were a few other people with another trek but

when we woke up they were all gone. The incessant rain had driven them back to town for  a warm shower. I sorely wanted to follow their lead but we had paid for a three night / four day trek and I don’t go back on that sorta thing. The third morning was clear and cloudless with our first real views of the mountains around us. The weather was clear and balmy and the majority of our hike was downhill. Our guide decide that the weather was good enough to take us on a side trip to a glacier lake at the base of the mountain Alpamayo. At first I just thought our guide wanted to punish me for eating too many pancakes in the morning but when I saw the stunning turquoise lake and glacier, I decided both the trek and the pancakes were worth the pain.

The third and fourth days where blessed with prefect weather. We walked alongside a donkey herd past cactus plants in a picture-perfect alpine valley.  The only hiccup occurred on the final day of the trek. We were told that the remainder of the trek would be an easy downhill walk, which was just what the doctor ordered as my blisters where killing me by then. Instead of the smooth sailing that was promised, we encountered a massive rock slide
covering the entire wall of the valley which extended for over a mile. It was rough work picking ourselves over slippery gravel and the path had crumbled into the river in many places. I still don’t know how the heavily loaded donkey made it through. While we were walking I kept thinking about how excited I was to go to Lima and explore the city; this turned out to be a bit premature as rock slides, flooding and other extreme weather

postponed our arrival for over a week.

Our Santa Cruz trek has been a highlight of our time spent in Peru. It was truly one of the most beautiful places I have ever experienced. I only wish that it didn’t end in us being trapped in the Andes for weeks. I would recommend that people only come up here if they have flights in and out, or if they have all the time in the world to relax and eat the cuy. 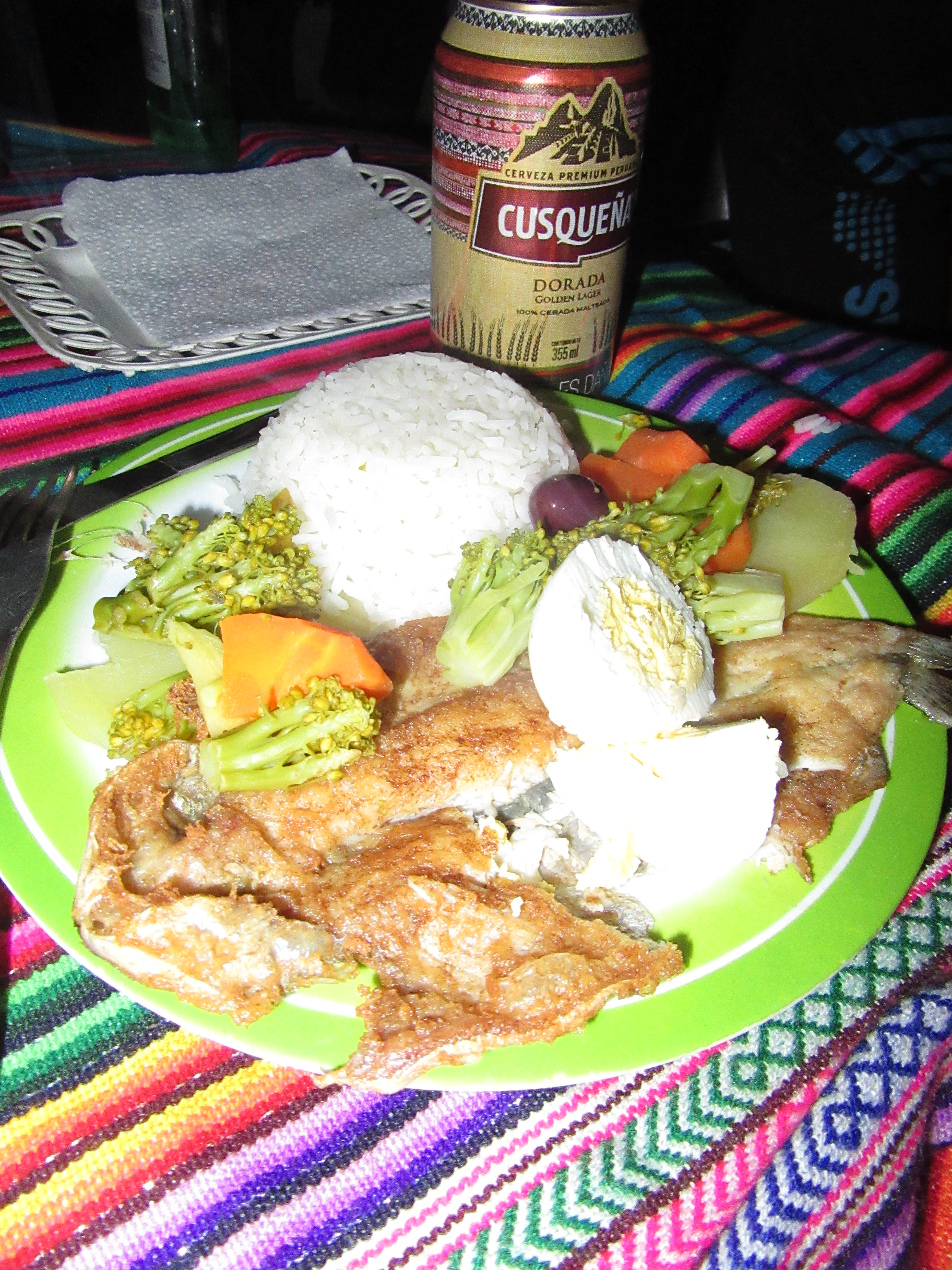 Another day, another macro lager. Although this one is from Backus’ “elite” line. This beer is a watery lager with surgery malt injected to substitute flavor. I like the cheaper Crystal beer more than this one. At least I know what I am getting into.

Final score: one out of five night time chats with friendly cows.

*We could have waited four days to take a group trek for a lot less money but were too impatient. We then ended up being trapped in town for two weeks. Let that be a lesson to you kids, never make any time based plans in Peru.