Although I was old enough to legally drink, I still went to the bookstore party for the release of Harry Potter and the Deathly Hollows. I was a bit too old to have grown up with Harry, but I was grateful to be allowed on the ride. I’m not worried about losing any “hip beer snob” vibes—my bookish career aspirations are a secret to no one at this point. If you are afraid of losing some street cred then turn away now. This entire blog will cover Harry Potter nerdiness. Are the cool kids gone? Whew.

Last May Eric and I carefully ventured into the land of gators and Florida Men so we could act like giant kids at the Universal Studios Wizarding World of Harry Potter. The plan was to squish in a trip to the park before continuing south to Fort Lauderdale for my very first cruise experience—more on that trip in a later blog.

The Wizarding World of Harry Potter is manically spread out over the two parks: Universal Studios has Diagon Alley and Islands of Adventure has Hogsmeade Village. We decided to start our day in Universal Studios as it opened to all guests (i.e. people who both were and were not staying in official resorts) at the same time. When the clock struck eight, we dashed away leaving our fellow Americans in the dust. Despite a few pit-stops for photo ops, Eric and I were among the first few in Diagon Alley. It is spectacular. While the design of the rest of Universal Studios looked a bit dated and fell flat for me, Diagon Alley is a masterpiece. Each brick, each detail helps transport you into J.K. Rowling’s creation. We didn’t have as much time to ogle, as we wanted to beat the lines for the Escape From Gringotts.

Escape from Gringotts is the only ride in Diagon Alley. It’s a combination roller coaster with a 3D movie starring actors from the original cast. Rides which require 3D glasses can often seem awkward and buggy, but Escape from Gringotts gets it just right. It was my favorite ride of the visit, even after my fourth and final ride at the end of the day.

Exploring Diagon Alley could take hours on its own. Popping in and out of shops, exploring dark backalleys and brightly lit courtyards, the land is a ride of its own. One of the magically inventive ways Universal Studios tries to take your money is by selling wands. These interactive wands have a sensor on the outside which allows the user to cast spells around the park. Of course I wanted one. Thanks to Pottermore I know that I should have a brittle acacia wood wand with a unicorn hair core.* Sadly, the wands Universal sold were lacking in real unicorn hair and not worth the $48 price tag. The Wizarding World of Harry Potter is built to be a fully immersive experience. Instead of shopping for swag with the popular characters, you shop like a Hogwarts student. I chose to invest in quidditch cheer flags for my sisters but I could have bought wax to seal my owl-carried letters home with, every flavor beans or a cauldron just as easily.

After completing our tour of Diagon Alley, Eric and I took the Hogwarts Express to Hogsmeade Village. The Hogwarts Express is 1/4 ride and 3/4 immersive movie experience which takes guests from Universal Studios to Islands of Adventure.** My only complaint is that the cabins are pretty small and it’s a tight fit squashing in six average sized Americans. After avoiding Death Eaters and getting to know my fellow passengers in the Orlando heat, we arrived at Hogmeade Village.

Hogmeade Village is the original land in the Wizarding World of Harry Potter. It’s the quaint wintery village in the shadow of Hogwarts Castle. It feels less magical in its set design than Diagon Alley but has more rides and is larger. Two of the rides in Hogmeade Village are traditional roller coasters which have been Potter-ified. Dueling Dragons is a inverted roller coaster whose excitement held up over our six rides. Did I mention that there were no lines during our visit? The longest line we waited in was 25 minutes. Before you get too jealous, we also went on 8th grade graduation trip day. The park was swarming with kids at peak awkward in matching shirts.

The grand attraction of the Wizarding Word of Harry Potter is Hogwarts castle itself, looming over Hogmeade Village. Inside the castle is the ride Harry Potter and the Forbidden Journey. Like Escape from Gringotts, Harry Potter and the Forbidden Journey is a roller coaster with aspects of a 3D movie. This ride switches from real life props in a dark room to the 3D movie and back again many times, all while being spun around. I am not a squeamish person; I don’t get car sick. However this ride made me feel like I was about to chunder my chocolate frog. I was not alone in this. Eric and I could only stomach the ride once and saw a muggle covered in vomit a few minutes after we left the ride. After letting our stomachs settle, we decided we needed a sugar rush to beat the heat, and settled on a frosty pint of butterbeer.

Butterbeer in the world of Harry Potter is slightly alcoholic and served warm. In Orlando, the Butterbeer is served like a slushie, without any alcohol. When an international guest asked if there was any alcohol in the drink the disgruntled employee*** quipped, “No. It’s just butterscotch, cream, and sugar. Americans love sugar”. She wasn’t wrong. The drink was delicious and reminded me of drinking melted ice cream.

If you can hit these parks on a slow day, one day is enough time to experience everything. If you are a Harry Potter fan, or just like the idea of a theme park based on books, you must check out the Wizarding World of Harry Potter. 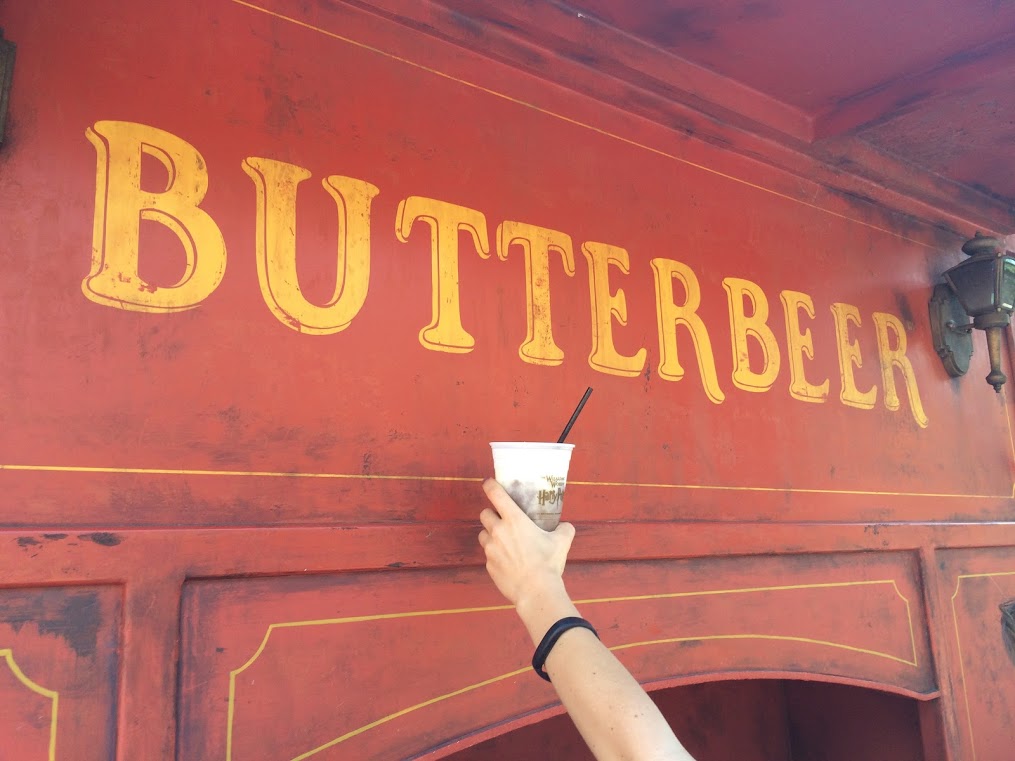 Butterbeer by a friendly witch

0% / A Troll Ton of Sweetening Units

Butterbeer is a fabulous midmorning pick-me-up on a humid day in Hogsmeade. It tastes like a slushie cream soda. Perhaps it is just my muggleness speaking but it was a bit too sweet for my tastes. That is until I find a hex to prevent obesity.

**Pro-tip: the Hogwarts Express is different each direction so be sure to take it both ways!

***Universal employees are on a whole, much less in character than at Disney. Not that I blame them.