Big Beer in the Colonial Heartland

Puebla is beautiful city with breathtaking colonial architecture located  two hours outside of Mexico City. Despite the city being the fourth largest in the country, Puebla came across as having a small town feel during the few days we spent there. Puebla pinged on my travel radar when I discovered it was the birthplace of Mole. As the majority of this trip revolved around food, I certainly didn’t plan on stopping now!

Eric and I arrived in Puebla after a harried bus trip where the bus driver dropped us off on the side of the highway. The bus was headed to Mexico City and decided that the local town of Amozoc was a close enough place to slow down to three miles an hour and wish us luck. After a few minutes of panic (during which we took a selfie because #millennials), we navigated the next two buses which took us to the historic center of town.

The Zocalo and center of town was named a UNESCO world heritage site and is scattered with gorgeous examples of colonial tiled architecture. Puebla is also know for it’s local specialty Tacos Arabes, which are tacos with shawarma-style meat in soft flour pitas. It’s a culinary mash-up that I had to try.  We tried the dish at Las Ranas in the center of town. I knew it was going to be good the moment I saw the line through the kicten and on to the street. We were not disappointed; these tacos were flavorful with the right amount of spice and the pita bread “shell” made the experience extra memorable. We paired the tacos with two cold bottles of Indio, a mass produced Mexican lager which lacks the unpleasant skunkyness of Corona.

After dinner, we explored the town square including the Cathedral which was completed in 1690 and had the tallest bell towers in Mexico. I forced Eric to sit through a weeknight Mass with me and I am proud to report that the post-communion dine and dash is alive and well in Mexico.

The next day we decided to travel to the neighboring town of Cholula. Was there a hot sauce themed reason behind this destination? Sadly no, as the sauce is made in Chapala, Mexico. Cholula is famous for its Great Pyramid of Cholula, also known as Tlachihualtepetl. Covered by vegetation, the pyramid extends underground and resembles a large hill. It appears relatively unassuming so I was shocked to discover that it is the largest pyramid in the word today. Total volume of the pyramid is estimated at over 4.45 million cubic meters, which is even larger than that of the Great Pyramid of Giza in Egypt, at about 2.5 million cubic meters. Tourists enter the pyramid at its base, weaving around excavated tunnels before getting deposited out the opposite side.

After exploring the ruins at the base of the pyramid, we braved the steep incline to the top to take in the spectacular view of the city in the shadow of two volcanoes. Cholula was an unexpected stop in our trip, and also one of the most memorable.  We had a great lunch at this tiny neighborhood restaurant, explored la tumba*, and enjoyed a view of a lifetime. If you are planning a trip to Mexico City in the future, I highly recommend the slower pace, killer food and beautiful scenery of Puebla and Cholula. With or without the hot sauce.

*Tomb, one of the stranger words I picked up.

Heavier than a Pacifico or Corona, this is below average amber by craft standards. The flavor reminds me of frat parties gone by, that stereotypical funk flavor of “big beer”.  Paired with a great taco in the Mexican heat, its score raised considerably. 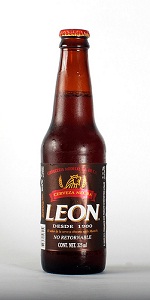 This was my favorite mass produced beer in Mexico. While I can’t in good conscience sit here and tell you to rush out and try it, I can recommend it for a cheap solution to what to drink in a Mexico City Air BnB. You might not be able to taste the hops in this beer, but the malt flavor comes through nicely. It’s caramely but not too sweet. Despite being on the bottom of the Mexican beer price range, León is a pleasant drinkable beer.

Final Score; three out of five trips to the mercado.