Day of the Dead in Oaxaca Mexico

The first thing I learned upon arriving in Mexico is that the phrase dia de los muertos is a major misnomer. The word “dia” implies that the festivities last only one day or perhaps a single night. It was clear from the fireworks that greeted our 3pm arrival on October 29th that the festivities were already underway. This was exciting; after all it was the reason I shifted the trip to November in the first place. Being greeted by daytime fireworks, a heavy police presence, and tuba music was Mexico’s way of saying “Hello, we’re in the middle of a party. Would you like to join?”

I am the type of girl who gets restless if I can’t leave the country at least once a calendar year. This trip was long overdue, as a move to Atlanta had sated my wanderlust for a few months. With an adult-like job and a dream of a much greater trip in the near future, we decided on Mexico with its affordable airfare and lust-worthy food. I didn’t expect much out of Mexico; after all I felt like I knew my neighbor to the south. Crime, tourists who drink too much, and urlne-flavored beer in clear glass bottles. I am pleased to report that none of that was true!*

Eric and I spent the first four days of out trip in Oaxaca City in the Southwest of the country. This city is famous for it’s Day of the Dead festivities, colonial architecture, and mezcal. The first day was spent exploring town and attempting to get our bearings. As we were eating dinner at a market stall, a man noticed that I was intently staring at his hot chocolate. The man struck up a conversation with Eric, telling us that if we hadn’t tried the chocolate by they time we left the city then we’d never truly been. His friendly, open manner was a great example of the people we would meet in the city. It’s also worth mentioning that unlike other places I have been in the world, you really can’t get around Mexico that well in broken English. Blessedly, Eric decided that Spanish was a better language to study in his life time as opposed to my wasted years learning German and then Arabic. In addition to being our resident translator, Eric was a great teacher helping me count beyond twelve and learn new useful phrases like “cuanto cuesta” (how much does it cost), “trente”(thirty), and “zapateria” (shoe store). Okay fine. Some phases might have been more useful than others.

Oaxaca has a past much more ancient than its colonial roots. The Zapotec ruins of the city of Monte Alban lie six miles to the west of Oaxaca. The city could be reached in a day hike but Eric and I vouched for the bus to take us up to the ruins. The site provided our first glance into the rich history of the country. The town of Oaxaca is graced with a wonderful museums and majestic churches. A highlight of the city is the baroque Santo Domingo de Guzmán Church. The ceiling of the church traces the saints family tree in a spectacular (and literal) fashion. The city is easy to explore by foot and never felt nervous about my safety even when walking around at night. The greatest dangers faced by a pedestrian is getting run over by the parades of dancing revelers which go on all night and day. Each of these parades are led by a young man firing off firecrackers. The firecrackers would be lit from a metal stand carried 15 yards or so in front of the on-coming crowd. Another traveler we meet told us about witnessing a young man light off of a metal contraption on his own head. Yikes!

On the night of October 31st, Eric and I went to Xoxocotlan Cemetery just outside the city. The cemetery had been transformed into a carnival with food stalls and games outside while inside families celebrated by picnicking at the graveside. The majority of graves where decorated with bright orange carnations, while others had intricate sand paintings. Mariachi bands roamed about playing for the families. There were also a good number of tourists, many of them carrying around tripods and other professional photo equipment to capture the moment. I heard that the cemetery at Atzompa, another small town nearby, is more of a somber and restrained location, but Eric and I wanted to soak up the party atmosphere. We were extra glad that we did as we ended up meeting two new friends on our way out (Hi Karen and Letty!).

The number one highlight of Oaxaca was undoubtedly all of the wonderful people we met; great food came a close second. Some of the highlights include Elotes – grilled corn with mayonnaise, chili and cheese, Tlayudas – a large flour tortilla filled with beans, avocado, meat, salsa and Oaxacan cheese, and the best Molé Negro i’ve had in my life. Now don’t worry dear readers, I did remember that this is a beer blog after all. Eric and I travel near and far to give you the best in professional beer journalism and we’re not about to stop now! 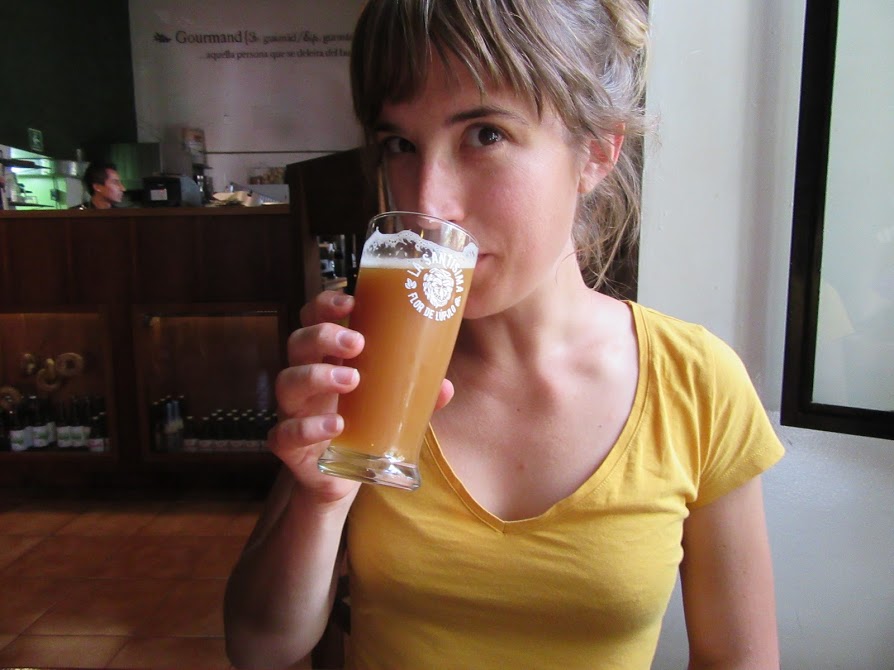 Santisima Flor de Lupulo is a nanobrewery located 15 minutes away from the main plaza. Their beer is only sold n the swanky attached cafe which offered four different beers on tap when we arrived. The beers were quite expensive for our budget and each half pint put us out 50 pesos or three US dollars. Two out of the four beers on the menu weren’t in stock so Eric and I sampled the Pumpkin and the Pale. Craft breweries are few and far between in Mexico as they face extreme pressure from the big name brewing. I was always on alert for local beers but they didn’t cross my path on their own. Craft beer in Mexico takes a lot of effort to find. Just like how traveling outside of resorts takes just a little more effort, adventuring for new and unique experiences pays off ten fold.

It had a very light hop flavor probably from freeze dried hops. This was a mild and smooth beer with a slight amount of caramel flavor which faded nicely into bitterness. 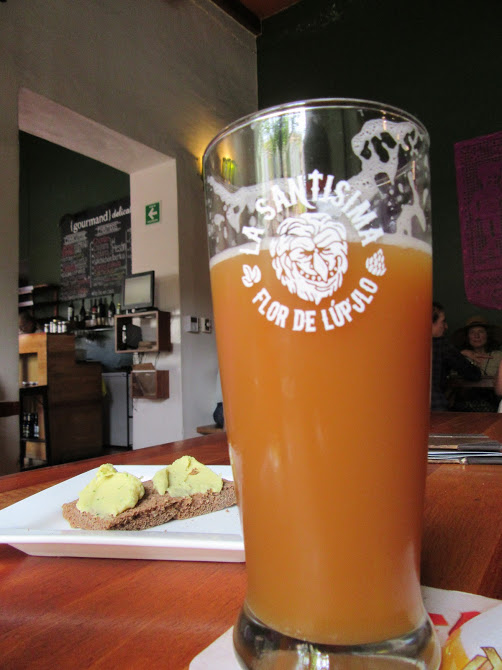 This a very cloudy beer which tastes of the gourd pumpkin not the spice. Despite my earlier claim no good pumpkin beer actually tastes like pumpkin, I really enjoyed this beer. Sure, it tasted like a mildly alcoholic juice but I still enjoyed it. A half of a pint was more than enough.

Final Score; three out of five cups of atole.

*Okay there might have been one instance of petty crime and while I witnessed my fair share of Corona, I kept my distance.