Brewery tours have become a standard affair for many fans of craft beer. In my state of Georgia, they are the only legal option to enjoy the breweries’ product on site. Thanks to these legal restrictions, which don’t appear to be going away anytime soon, I have begun to experience “brewery tour burn out”. I needed something new and exciting to mix up the standard six samplers. When I discovered that Orpheus was offering not just any tour but one that boasted of “a never before seen flavor experience”, I knew that I was going to be thoroughly shaken out of my rut.

Flavor hacking, or flavor tripping, first appeared on my radar in 2008 when The New York Times published an article about the crème de la crème of Manhattan hosting wildly fabulous parties where, thanks to miracle berries flown in from West Africa, they could delight and astonish their equally bourgeois guests. The berries, known as synsepalum dulcificum, have a protein which binds to the taste buds on the tongue where acidic flavors are replaced by sweetness. Imagine biting into a raw lemon and tasting the sweetest lemonade or drinking straight Tabasco which tastes like sweet and sour sauce, and doesn’t burn until it hits the back of your throat. These where just some of the experiences I had when I tried the synthetic version of the berry at the flavor hacking event.

The location of the taste bud trip was Orpheus Brewing. A relatively new entity to the Atlanta craft beer scene, Orpheus set up shop over looking beautiful Piedmont Park less than a year ago and has rapidly become one of the top names in the ITP craft breweries. Orpheus specializes in big bold beers with distinct flavors and high ABV. Finally a place to get a freshly brewed sour in this town!

Due to their youth and restrictive size of their brewery, Opheus had only five beers on tap for the flavor hacking event. This meant that all five beers could be sample pre and post miracle berry, if you brought a non-germophobic guest. Other food offerings included sour lime popsicles from King of Pops, pickled vegetables and cups of fruit to try with various unusual dipping sauces. The pickled vegetables were a disappointment as they had very little other than brine, which was completely masked by the berry tablets. Other than beer tasting, my favorite thing to do was chomp down on raw lemons and grapefruit which were transformed into the best lemonade I have ever tasted*. 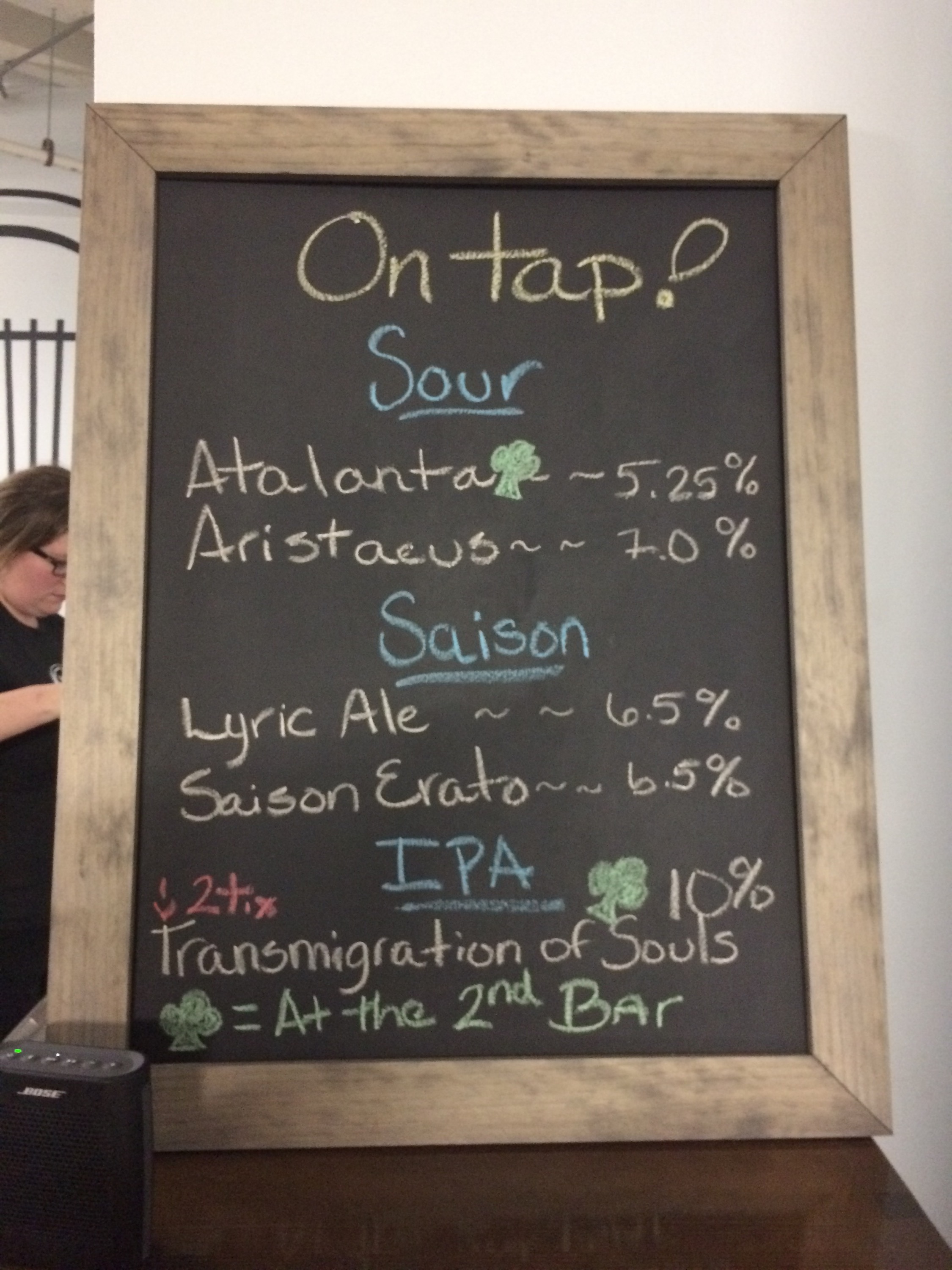 Beer drinking was a similarly trippy experience. Orpheus had one imperial IPA, two saisons and two sours on tap.The sours did not go through the open fermentation process and were less aggressively sour then I prefer. After the Inception-style sweetening of my tongue the sour beers tasted just a little off from their original flavor whereas the saisons and the IPA underwent a radical transformation.

Interested in trying the miracle berry for yourself? You can find the same brand of tablet from Amazon for $14 for a pack of ten. Just be sure to stock up on lemons and IPAs.

*Word of warning. If you are planning on attending a flavor hacking event, take some stomach medicine a few hours before.Your taste buds might be foiled but your digestive track will not. Who knew that eating raw lemons, hot sauce and beer for dinner would make me feel a little queasy?

I will be reviewing each of these beers before and after taking the flavor berries. I have included a few Orpheus created flavor profiles which are so gorgeous, I want to hang them on my wall. Imagine erasing the sour and bitter flavor profile from the beers. This created an entirely new flavor profile which often wasn’t recognizable as beer.

This is one of the beers that Orpheus brews year round. With a distinct banana aroma, this isn’t your classic sour beer. The earthiness of the a farmhouse style came out in this beer and the banana aroma became a banana aftertaste. I wasn’t blown away by this beer probably because I had hyped myself up for a funky sour instead of this hybrid style.

After the miracle berries the flavor profile of Atalanta didn’t change that much. The sour flavors dissipated leaving behind a slightly fruity ale.

This beer had a stronger hop flavor than I am used to in a Saison which in this beer turned out to be a big positive. There was a weak spiciness and a strong floral aroma. The Saison Erato has a surprisingly sweet finish which might be because it is a higher hopped version of the Lyric Ale, one of the breweries flagship beers.

Do you ever wish for the alcohol content of a regular beer with the flavor of a crisp summer shandy? Well look no further as Saison Erato transforms magnificently. Combining this beer with the miracle berry creates a qua fable masterpiece. I drank two of these beauties and I want them as my summer drink of choice come this Hotlanta August. Although with a ABV of 6.5% perhaps it’s best that I don’t keep a stash of miracle berries.

A strong name deserves a equally strong beer and the Transmigration of Souls succeeds on both accounts. This beer had a strong citrus aroma which masked the traditional IPA hop smell. The strong ABV is surprising as the beer itself lacks bitterness. The beer has a creamy texture which is extremely unusual in an IPA, I may however be biased by my second (post-berrie) tasting of this beer.

What happens when you strip all of bitter and sour flavors from an already unusual IPA? You have a cream soda doppelgänger with a 10% alcohol content. It’s best to sip this one.